The success of James Kandt’s early years as a painter did not delimit his growth; and after years torn between representationalism and experimentation, he found his true voice in what he refers to as abstract realism. Whether Kandt is working with oil on panel or charcoal on paper, a subject like a tree will disport itself in impressively life-like detail, the vagaries of its bark brought to life through skilled brushstrokes and impasto. And yet Kandt’s application of colors-which stray just slightly from natural earth tones-and the manner in which he breaks up the ground of the image creates a decentering effect. On top of this, Kandt often forces upon the viewer an unusual angle or point of view, helping us encounter nature in a way we can’t quite do in the world. Walking through an exhibit of Kandt’s trees is a trip through a forest half-remembered and half-dreamed: everything is recognizable, but all is new.

A new perspective on trees.

Pity the expatriate of nature who has never stretched out under a tree, head butted up against its trunk, and looked up. Nothing puts the smallness of human troubles into perspective as quickly as lying down at the foot of a behemoth with its colossal limbs stretched to the corners of the sky. This is grace. Bestowed by Mother Nature.

Play it forward. Artist James Kandt has captured that very feeling of willingly surrendering supine to nature in his current work, “Landshape Series,” shown by Trish Higgins Fine Art in Wichita, Kan. After a bout with abstract, non-representational painting, it seems Kandt himself has surrendered recumbent to nature. And as the artist succumbs to the trees, so does the viewer. The large canvases, up to 6 by 4 feet, have the power to transport us away from our urban landscapes and horizon lines. Kandt’s “Landshape Series” delivers peace through a slightly off-kilter natural world.

Don’t look up these trees for traditional landscapes or bucolic nature studies. There’s nothing to lull the viewer into discounting or ignoring the imagery as simply trees. The organic orientation and new perspective of these paintings has pushed Kandt’s compositions toward abstract and pushes the viewer to rethink nature.

“I find myself returning to a more natural arena, of painting recognizable images in an abstract arrangement of elements,” Kandt says. “I like to refer to these images as abstract realism.”

But it’s more than composition and perspective that push the paintings toward abstract realism. Kandt plays with pattern in the textures found in nature. In “Untitled Landshape No. 7,” the texture of the bark on a twisting branch replicates the shapes of the fall leaves on the tree. The leaves seem to all be blowing in the same direction as the deeply rutted bark is growing. They move in unison. 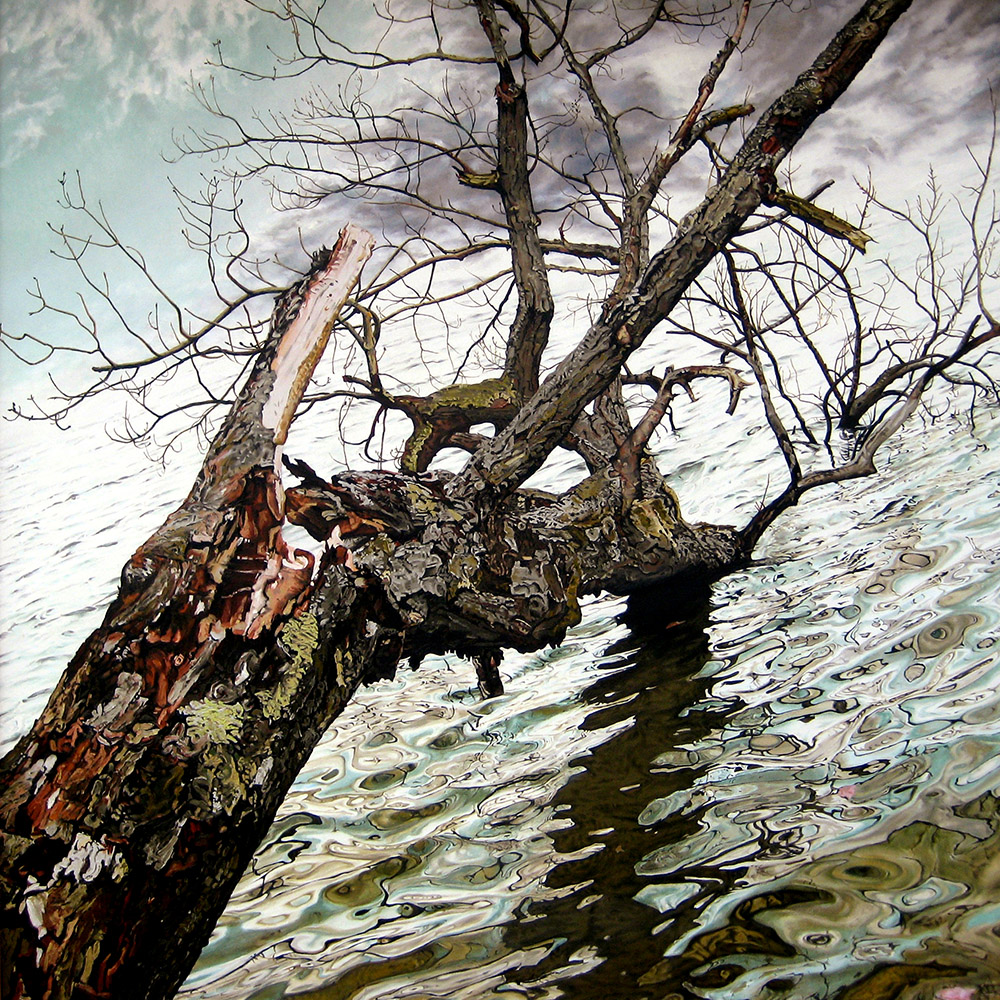 Kandt has an ability to push past realism with more than tree textures. He handles the ripples on water in “Untitled Landshape No. 15” with the same dexterity toward abstraction. The play of light and reflections on water are transformed from real to surreal as the viewer studies the canvas.

Kandt’s color palette is another well-employed tool in his abstract realism tool belt. In “Untitled Landshape No. 12,” the peeling black and grey bark of a sycamore tree reveals the buttery yellowness of the trunk below. Blacks, greys and yellow all sing against the Prussian blue sky.

In Kandt’s most successful piece in the show, “Untitled Landshape No. 9,” light, too is added as an element in this ethereal realism gone mad to the point of becoming abstract. Looking up through the trees, behind a dark trunk and its branches, a yellow arcing branch that glows with sunlight runs parallel to the trunk while intersecting the dark branch. Both the dark somber tones of the closer timber and the warm yellows of the further branches play beautifully against the blues of the sky. Leaves dance in patterns at the composition’s edges. Light, color, texture, pattern, perspective and composition work perfectly in this piece to accomplish the artist’s stated goal of moving viewers from their preconceived ideas and introducing them to a comfortable, but undiscovered moment in nature.

Keeping you in touch with the World of Art

New York City – In contrast to many artists today, who begin showing their work right out of art school, James Kandt has been painting for many years, but has only recently begun exhibiting. While working as an art director for a film company in Hollywood that was a pioneer in the development of computer animation, and later running his own design firm, Kandt patiently perfected his technique until he felt ready to share his work with the world.

Kandt’s “Landshape series” evolved from his long term interest in abstract painting. As with many artists of his generation, one can only assume that his primary influence was Abstract Expressionism, the movement that put American painting on the map. However, the personal synthesis that he has come to refer to as “abstract realism” also harks back, in spirit fi not in style, to earlier artist like Arthur Dove, Marsden Hartley, and Georgia O’Keeffe, pioneering modernists who never abandoned their roots in nature. 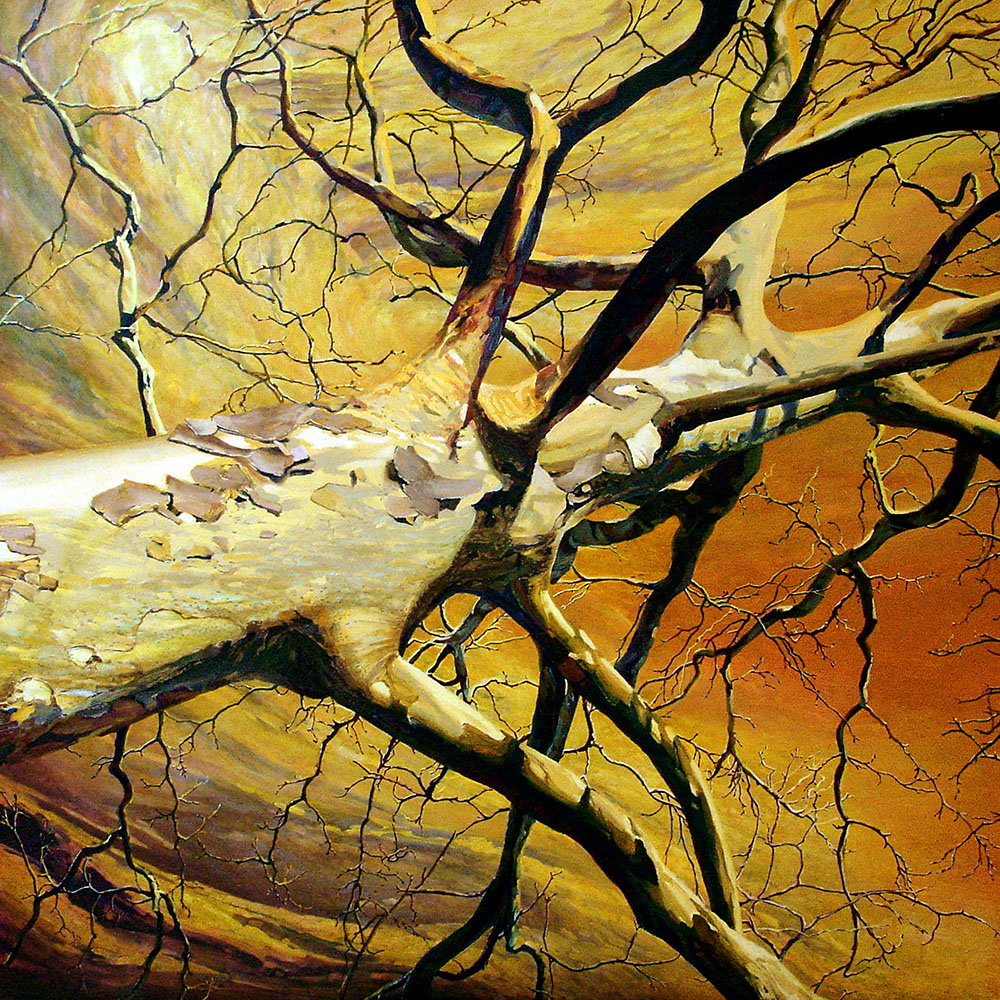 The oil on panel that Kandt calls “Untitled Landshape Nol 5,” in particular, is reminiscent of O’Keeffe’s famous painting of a pine tree viewed from the forest floor for its vertiginous perspective.  Kandt, however, combines a finer focused photorealism with a nearly monochromatic palette of earth tonalities to make his painting simultaneously more specific and abstract than that of his predecessor. And by violating the old academic rule that an artist should avoid “monotony” by never painting in a perfect square panel, Kandt lends his 48” by 48” composition a sense of limitless space that actually enhances its abstract qualities.

The paradox of the particular merged with the stringently formal is very much at the heart of Kandt’s abstract realist style, which makes intimate capital of the surfaces of the trees that are his sole subjects, even while distancing them somewhat from the conventions of realism by virtue of his coloristic restraint and dramatic compositional cropping. Photography and computer manipulation also play a part in the early stages of his oils, enabling him to work out formal solutions regarding color and compositions before putting brush to canvas. Yet, for all the deliberation that precedes the painting process, Kandt’s compositions finally achieve a dynamic sense of “push and pull” that is very much akin to Abstract Expressionism. 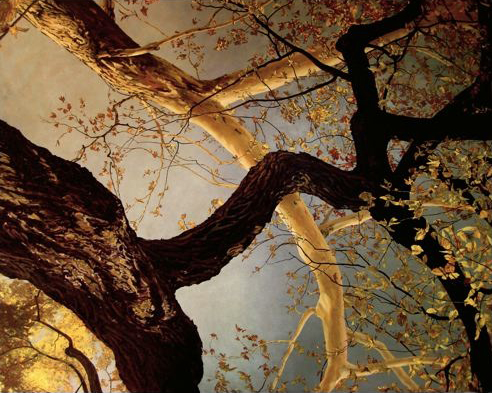 However, the painter of that school with whom he appears to have the most in common is Franz Kline, best known for his black and white calligraphic abstractions, which appeared spontaneous but were actually carefully planned and executed from sketches that the artist projected onto the canvas with an opaque projector. It seems a logical evolution from that kind of process to Kandt’s abstract realism, in which the tree-trunks and branches, although meticulously delineated down to the most detailed textures of the bark, display a thrusting velocity every bit as dynamic as Kline’s girder-like black forms. Like Andrew Wyeth, who once stated that his ostensibly realist paintings were full of “little abstractions,” James Kandt succeeds splendidly in having it both ways…By Maurice Taplinger